One of the things an expectant mom is never prepared for, is to be told that there is something wrong with her baby. To be told this after birth is equally traumatic. Our eldest son, Matthew, was born at 37 weeks and doctors immediately realised there was something wrong, as he was cyanotic (Blue).

What transpired in the next 48 hours is imprinted on our minds. Matthew spent the night in NICU whilst doctors fought to keep him alive. He was then airlifted to a Johannesburg hospital, and before we even arrived, we were asked for telephonic permission for him to have open heart surgery to save his life. He was 36 hours old!

Matthew had been born with a congenital heart defect called Tetralogy of Fallots coupled with severe pulmonary atresia. He in effect had a 3 chambered heart (there was a partial septum between his two ventricles) his aorta was mal-aligned and he had a pulmonary artery that ended in a blind nipple and was not attached to the heart. This meant that he had no pulmonary valve, his pulmonary arteries were incredibly small and his lungs under-developed. 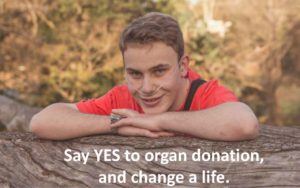 In South Africa 1 in 100 babies is born with a congenital heart defect, although it is believed that because of the high presence of diabetes in our nation and poor nutrition during pregnancy there is actually a slightly higher incidence. This means that we are effectively looking at between 25 – 30 children born with Congenital Heart Disease/defect (CHD) each day in SA. The sad reality is that only 12 of those children will be diagnosed and treated.

To say Matthew had a hairy start is an understatement. We finally brought our son home at 7 and half weeks, on oxygen and needing to see the paediatrician almost daily. Matthew required his second of 5 open heart surgeries at 15 months of age.. Each surgery and intervention, of which there were many over the years, brought with it its own stresses, but what is evident is that Matthew has always been a fighter.

At 13 years of age after the diagnosis of interstitial lung disease and pulmonary hypertension, Matthew was placed on oxygen 24/7 and on the transplant waiting list for a heart and bi-lateral lung transplant. This was to bring about many changes in our household as we always had to ensure he could receive his oxygen. This was also the first time that doctors told us that Matthew would not survive further surgery or interventions (cardio-catherisations) as his pulmonary artery had calcified.

Matthew is now 19, has been on the transplant waiting list for 6 years and is deteriorating quicker. He is very fatigued, often sleeping 14 – 16 hours a day. Through this whole period, Matthew has surprised not only us but his doctors as well, with his positive attitude and fighting spirit.

One of the things that keep him going is the organ donor awareness we try to do for everyone waiting for a transplant. We realised early on that very often it is families who have been impacted by the need for organ donation who are aware of the necessity for people to consider it.

There are less than 600 solid organ and cornea transplants in South Africa each year. The fewest transplants occur in KwaZulu Natal. This is because donor registrations and donor referrals are much fewer in KZN than the rest of the country.

If you would like to find out more about organ donation please visit the Organ Donor Foundations website www.odf.org.za The ODF answer all of the frequently asked questions and give you the opportunity to register on line.

An organ donor can save up to seven lives and improve up to 50 more lives with tissue transplants (heart valves, ligaments, skin, bone and cornea)

There is no cost to registering as an organ donor, neither is there any cost to your estate once your next of kin have given signed consent for donation.

Your next of kin make the final decision at the time so it is imperative that you tell them your wishes.