We all know someone who snores and have all at some point been kept awake by it. But while we feel like we’re the only ones suffering a poor nights sleep, the person snoring is also likely to suffer a poor night’s sleep as well .

The prevalence of habitual snoring (meaning not a brief episode of snoring associated with a head cold) is up to 28% for females and 44% for males.

What is snoring? While you sleep, the muscles of your throat relax, your tongue falls backward, and your throat becomes narrow and “floppy.” As you breathe, the walls of the throat begin to vibrate – generally when you breathe in, but also, to a lesser extent, when you breathe out. These vibrations lead to the characteristic sound of snoring

What causes it? There are several factors which facilitate snoring. First, the normal ageing process leads to the relaxation of the throat muscles, thus resulting in snoring. Anatomical abnormalities of the nose and throat, such as enlarged tonsils or adenoids, nasal polyps, or deviated nasal septum cause exaggerated narrowing of the throat during sleep and thus lead to snoring.

Functional abnormalities (e.g. inflammation of the nose and/or throat as may occur during respiratory infection or during allergy season, and smoking) will result in snoring. Sleep position, such as sleeping on your back, may lead to snoring in some people.

Alcohol is a potent muscle relaxant and its ingestion in the evening will cause snoring. Muscle relaxants taken in the evening may lead to or worsen snoring in some individuals. One of the most important risk factors is obesity, and in particular having a lot of fatty tissue around the neck. 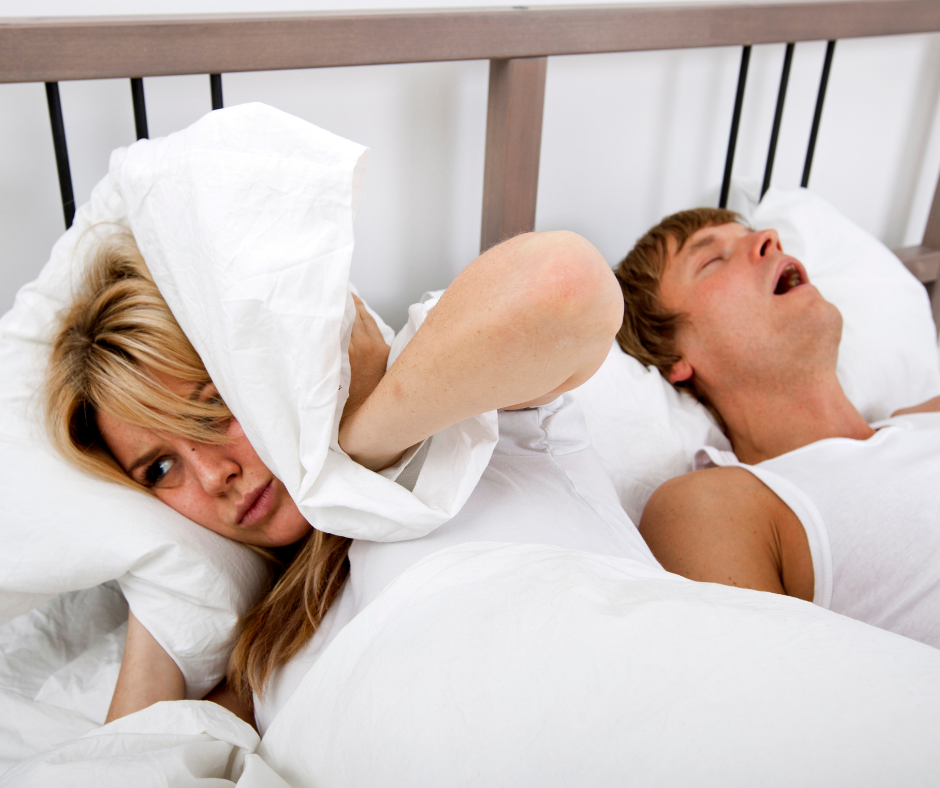 What are some of the symptoms?
•Excessive daytime sleepiness
•Morning headaches
•Recent weight gain
•Awakening in the morning not feeling rested
•Awaking at night feeling confused
•Change in your level of attention, concentration, or memory
•Observed pauses in breathing during sleep

Why is it important to get this seen to?

Habitual snoring can be a sign of a serious health problem, including obstructive sleep apnoea which is Interruptions of breathing (lasting from a few seconds to minutes) during sleep caused by partial or total obstruction or blockage of the airway creates several problems, including:

•Frequent waking from sleep, even though you may not realize it
•Light sleeping. Waking up so many times a night interferes with the normal pattern of sleep, causing more time to be spent in light sleep than in more restorative, deeper sleep.
•Increased risk of weight gain and diabetes
•Strain on the heart.
•Poor night’s sleep.

There is hope though. There are several options that can be used to treat snoring and sleep apnea. These will generally include:
•Lifestyle modification (i.e. avoidance of risk factors mentioned above, sleep position training if applicable, treatment of allergies if applicable, etc…);
•Surgery (generally on the back of the throat and roof of the mouth, or the nose if applicable, using a variety of instruments including scalpel, laser, or microwaves);
•Appliances (mainly oral appliances constructed by a dentist experienced in treatment of snoring and sleep apnea, but also other appliances such as nasal dilators);
•and sometimes CPAP (a continuous positive airway pressure appliance which blows room air into the back of the throat thus preventing it from collapse).

If you or your partner has concerns, please make an appointment to be seen and assessed as snoring can be managed.

Thank you to Dr Susan Ford for the contribution.